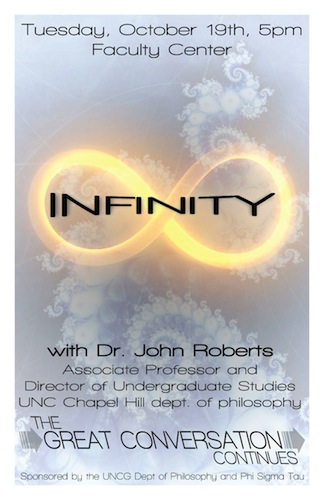 Among the ancient Greek philosophers, it was a common view that there
can exist only a “potential infinity,” never an “actual infinity”: So for example, you could designate a point on a line and then designate another one and keep going without ever stopping, but that doesn’t mean that in the physical world there actually exists an infinite collection of things called “points” — in fact (according to this
view), there cannot exist an infinite collection of actual physical things, and it is impossible for anyone to actually complete an infinite sequence of tasks.

The conversation will be finite.

The Great Conversation is sponsored by the Philosophy Dept and Phi Sigma Tau and offers an opportunity for students and faculty
of all disciplines to join us in philosophical inquiry.

Bring your good mind and bring a friend!